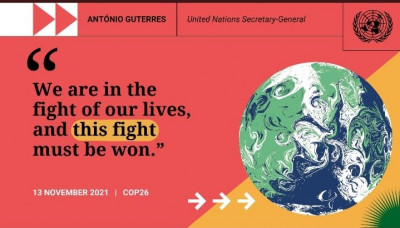 The COP26 climate summit, which took place in Scotland, has ended after a new deal was struck.

To help prevent catastrophe, 200 countries were asked for their plans to cut down emissions by 2030. But, some leaders and campaigners said that the Glasgow Climate Pact did not go far enough.
Countries were tasked with making sure that temperatures do not go above 1.5C. With the agreements we have now, organisations calculate it will go up by 1.8C – 2.4C+.

But all has not been bleak, there have been huge steps taken by the 200 countries which attended. Leaders from more than 100 countries promised to stop deforestation by 2030, which is a huge statement, if actually implemented and would go a long way in helping to reduce climate change.

More than 40 countries have committed to move away from coal. The world’s biggest users like China and the US however, didn’t sign up, though they did agree to work together over the next 10 years to tackle climate change.

India has promised to cut its emissions to net zero by 2070 – missing a key goal of the COP26 summit for countries to commit to reach the target by 2050. India is the world's fourth biggest emitter of carbon dioxide after China, the US and the EU.

But its huge population means its emissions per capita are much lower than other major world economies. India emitted 1.9 tonnes of CO2 per head of population in 2019, compared with 15.5 tonnes for the US and 12.5 tonnes for Russia that year. PM Modi made the pledge as one of five commitments from his country. They include a promise for India to get 50% of its energy from renewable resources by 2030, and by the same year to reduce total projected carbon emissions by one billion tonnes.