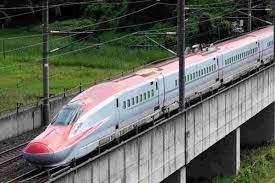 The JICA-funded project - India's biggest infrastructure project costing INR 1100 billion or USD 15.1 billion - has remained stuck in past years for multiple reasons including revised cost estimates and political differences between the Central and Maharashtra governments over acquisition of land required for the project. Of the 432.67 hectares required for the project in Maharashtra state, only 134.63 hectares or 31.12 percent of land had been acquired until September 30. While there is no official confirmation in the matter, revised project costs are said to have risen to INR 1800 billion or USD 24.7 billion , while efforts are being made to bring down the figure to INR 1600 billion or USD 21.9 billion.

Given the unlikelihood of substantial progress being made on the MAHSR line before India's next general elections in 2024, the National High Speed Rail Corporation (NHSRCL) - project executing agency - has apparently changed tact; immersing itself in the task of finalizing the Detailed Project Reports (DPRs) and in obtaining sanction on the six other HSR lines from the Union Cabinet. "The DPR on the Delhi-Varanasi line is in its final stages and likely to be put up for cabinet approval in November", NHSRCL spokesperson Sushma Gaur said. The DPR on the greenfield Delhi-Ayodhya-Howrah line is also being vigorously pursued, official sources said.

While 50 percent of civil works tenders amounting to INR 280 billion or USD 3.8 billion have been awarded and finalised, possibilities have arisen that these contracts will be looked at afresh. There are also speculations that the Tata Consultants could exit from it's role as Project Management Consultants. The US-based AE COM could be considered for the role. If these or similar changes are brought about, the project completion dates are likely to get pushed further up.