Bees vs Wasps: How do they help us? Do wasps deserve the hate they get? 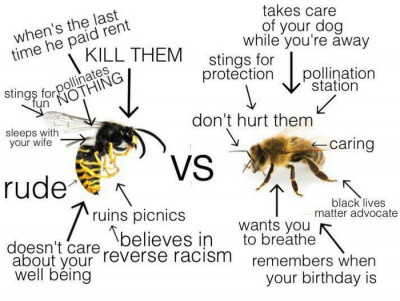 We've all heard stories of cute little bees and the big bad wasp. But here's the question: Are wasps as evil as we portray them?

Many wasps are major predators of spiders, as well as caterpillars, flies, ants, and other species that may be major economic pests to humans. Wasps also serve as food for other species.

Although there are several species, bees are important. These species are significant pollinators of different plants. Honeybees are economically very important to humans because they pollinate the majority of our crops. Many plant species would become extinct if only one bee species disappeared, and certain bee species are even more effective pollinators of some crops than honeybees.

Both are essential components of the food chain and ecosystem, but the loss of bees is likely to have a greater negative impact on the environment than the loss of wasps. But then again, there are too many species to make a concrete comparison.

However, one thing is clear, the ecosystem would not survive without the either of them. Wasps maybe rude, angry and grumbling but they actually do help you more than you think. Killing them is not a good idea, unless of course in self defence.