Athletics: Kenyans are running for other countries, but that’s not why medals are fewer 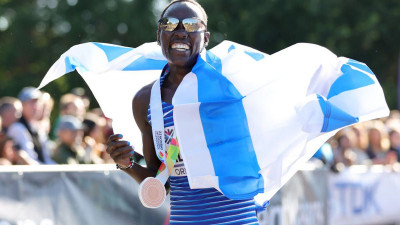 The 2022 World Athletics Championships ended in relative disappointment for Kenya, which continued its decline in the overall medal standings. Since the 2005 championships in Helsinki, when Kenya ranked ninth with only seven medals, the team has been exceptionally consistent. It has ranked in the top three in all subsequent competitions.

This year Kenya won 10 medals (two gold, five silver and three bronze), placing it fourth behind hosts the US, Ethiopia and Jamaica. Some countries might toast such an outcome. But not one that ranked first in 2015 with 16 medals and second with 11 medals in both 2017 and 2019.

Reaching this peak took a long time. At the 1987 championships Kenya managed only fifth with three medals. Subsequent championships saw Kenya improve to fourth in 1991, 1993 and 1997 before dramatically falling to 13th in 1999. Other years such as 2003 in Paris and 2005 marked some of the worst performances by Kenya. The fourth place finish in 2022 is a brutal reminder that it is easy to sink lower unless drastic corrective measures are taken.

What’s behind the decline? Firstly, poor local team selection due to a number of athletes committing to a punishing international running schedule. And an increase in doping-related suspensions of top Kenyan runners. Plus other countries have become more competitive in the Kenya-dominated long-distance races. Uganda is rising, as is a revamped Ethiopia. There’s also a significant increase in East African runners who have changed national allegiance from Ethiopia, Somalia, South Sudan and from Kenya.

Some observers may focus on the growing migration of athletics talent from Kenya as the biggest problem. World Athletics’ liberal provisions for change of national allegiance for sporting reasons has brought about large-scale migration of talents from Kenya and other countries.

It’s my view that like many Kenyan professionals who work abroad and remit huge portions of their earnings back to Kenya in the form of investments, welfare support and gifts, runners should be embraced in a similar manner.