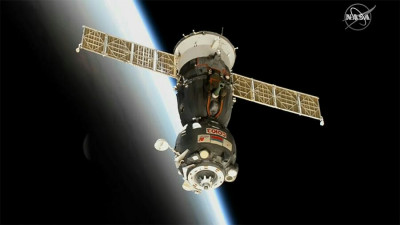 In the wee hours of March 30, Soyuz MS-19, a crew space ship undocked from the International Space Station (ISS), and landed on the steppe of Kazakhstan 4 hours later. American cosmonaut Mark Vande Hai, along with Russian cosmonauts Anton Shkaplerov and Pyotr Dubrov, landed amid applause of both American and Russian space scientists and technicians. Soon after landing, the Russian mission control center's screen displayed the message, "Welcome back, Mark!" in both Russian and English. NASA astronaut Mark Vande Hei was back on Earth, after a record-breaking 355 days stint in space.

Although the return has been a milestone of space co-operation between the US and Russia, that flourished up in the space station, the peaceful coexistence of astronauts and cosmonauts seem to be threatened by growing geopolitical tension down on Earth. In the past month, Russia’s invasion of Ukraine, followed by strict economic sanctions on Russia by the US and its allies appeared to have shattered the post-Cold War amity between Moscow and Washington in space research.

Shortly before his earth-bound journey, Vande Hai had mentioned how challenging the times are for international relations, in an interview to NASA Television. He had expressed his hope that the peace and the existing “connections can be maintained and serve as a path forward.”

Despite the apparent animosity between the two nations, the joint operations between NASA and Roscosmos, its Russian counterpart, will “continue to go well”, according to Joel Montalbano, the manager of NASA's International Space Station program. These space researchers have ignored both the American President’s call for non-cooperation in space science and Roscosmos chief Dmitry Rogozin’s threat to abandon American astronauts in space.

While Vande Hai, Shkaplerov and Dubrov flew towards their respective homes in the US and Russia, their researchers are ready to study the effects of long-duration spaceflight on the human body. Their enduring work in the space station will pave the way for future human explorers on the Moon and Mars, far away from the war zone of Ukraine.