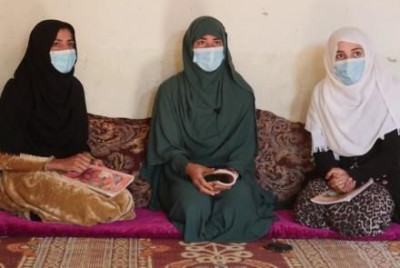 Several female students in eastern Nangarhar province voiced mounting despair about the lack of access to public universities, lack of employment opportunities for women and girls, and the uncertain future in general for Afghan girls and women in the country.

Ahmad Khan, a teacher in Nangarhar province, said that three of his daughters were students at the Department of Agriculture, Engineering and Literature at Nangarhar University. Still, for months the doors of public universities have been closed to them.

Kerishma, a 20-year-old woman living in the Shiwa district of Nangarhar, said that she and her younger sister (Zala) had passed the entrance exams for the engineering and literature departments at Nangarhar University last year, but had not yet been able to join their classes.

"I succeeded in the engineering department. The year ended, and I could not go to university; I'm very worried when I look at the empty notebooks that I have not written anything," said Kerishma, a student.

"Since the universities have been closed, our dreams and aspirations have been reduced. Although all girls like me are worried about our future, I hope the educational institutions open for girls," said Zala, Karishma's sister.

Ziba, a second-year student in the Agriculture department at Nangarhar University and the elder sister of Kerishma and Zala, said that she has faced many challenges. Still, due to the outbreak of COVID-19 disease and the collapse of the previous government, universities have been closed twice to the students.

"Public and private universities must be opened. This is very important for women because several women do not have breadwinners; they have studied, graduated, and are working to support their families," she said.

Ahmad Khan, the girls' father, said that he is trying to help his daughters continue their education despite economic challenges. He called on the Islamic Emirate to provide educational opportunities for girls and women.

"Education is the basis of the progress of a society and a country. When the education process stops, the development of society stops," said Ahmad Khan.