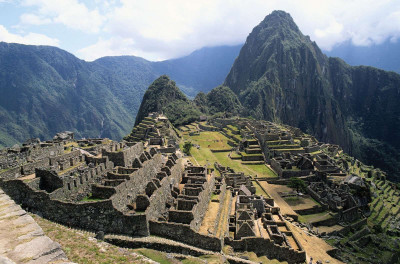 Machu Picchu is a 15th-century Inca citadel, located in the Eastern Cordillera of southern Peru,mountain ridge. In the Quechua language, machu means "old" or "old person", while pikchu means either "portion of coca being chewed" or "pyramid, pointed multi-sided solid; cone".Thus the name of the site is sometimes interpreted as "old mountain". It is made up of more than 150 buildings ranging from baths and houses to temples and sanctuaries.
The purpose of site is contended. Some believe it to be the home to the "Virgins of the sun", some as a pilgrimage site and some a royal retreat.

Unfortunately, most cities built by the Inca civilization were destroyed by the Spanish conquest. Machu Picchu was in a hidden location—invisible from below—and not found, making it one of the most well-preserved Inca cities and an archeological gem.
Machu Picchu is both a cultural and natural UNESCO World Heritage Site. Tourist deaths have been linked to altitude sickness, floods and hiking accidents. UNESCO received criticism for allowing tourists at the location given high risks of landslides, earthquakes and injury due to decaying structures.