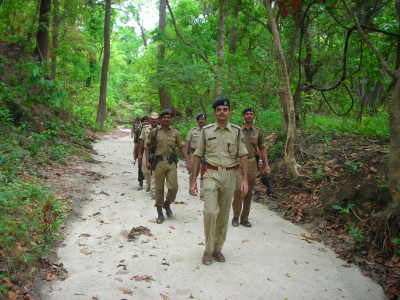 Soon after the first major police raid of the diara, a makeshift Police camp had already been set up in a remote diara settlement known as ‘Bauk Baitha ka Ghotha’, the name of which symbolised the hutment of a person named as ‘Bauk Baitha’ i.e. ‘dumb or foolish Baitha’, who may have lived there sometime in the remote past and about whom no one presently seemed to have any idea. The particular camp was set up especially to oversee the sugarcane planted in the lands under illegal occupation of the dasyu gangs and further in order to prevent their being harvested by the gang members and to organize their proper harvesting under police supervision for deposition of the proceeds thereof into the Government treasury.

After the first major raid of the diara, my next target was to complete a visit to all the police stations, 17 in number along with their outposts and located in distant and different parts of the region. Visiting some of the Police stations was an adventure in itself. To reach one particular Gobrahiya PS, one had to cross not less than 45 streams meandering in between the Himalayan foothills if one was proceeding from Bagaha or Valmikinagar side. The police vehicles would cross the river with the waters still fully flowing based upon chosen routes at places  where the river sand was supposed to be firm enough to allow fordability, and which were marked by earlier ‘tyre marks’ of vehicles which had crossed earlier. These routes along the streams kept on changing as they were regularly washed out after every heavy rain and also during flash floods which could arrive any moment due to rains in the upper mountains, even as no sign of rain could be seen in the vicinity.