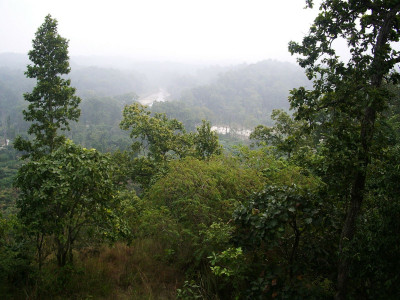 The terrible insect ordeal could end only after about four hours of an ever interrupting ride which was scaled to completion with much of physical human effort being put into amidst the insects biting all over.

Around midnight, we finally succeeded in entering the main river from the Ratwal stream. At this point as we left the stream we seemed to have disturbed several alligators who not less than 10 to 15 in number suddenly jumped with a typical sound into the waters from their resting places in the grasses. One of them with a long open snout (in which one could have tried to count the number of teeth in the spotlight) continued swimming parallel to our boat for almost 200 metres when it suddenly disappeared below and into the waters.

As we started the boat towards Bagaha, it was realized that much fuel had been exhausted in the effort to cross the stream and that reaching Bagaha was not possible without adequate replenishment on the way. About 20 litres of fuel was left with us in addition to whatever may have remained in the fuel tank. The river there had spread itself for almost a kilometer after the rains and from our position in the boat, its banks could not be seen by either the headlight or spot light when we tried to figure out whether we were proceeding in the right direction. As it became post-midnight, the boat seemed to be proceeding directionless in the dark trying to move against the flow which seemed to be quite fast bringing with it large weeds and portions of trees uprooted by the floodwaters.