S 35. Diary of a Cop : Adventures on a boat in the rivers of Bagaha 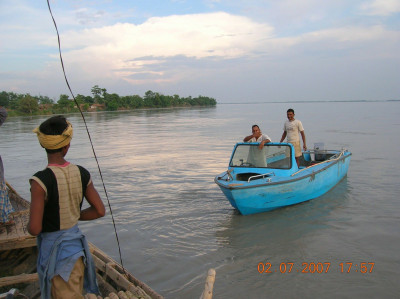 But the sailing was not going to be smooth thereafter as the boat got stuck almost after every 2 to 3 hundred metres on the way to the river which was just 5 kms away and which had not taken more than 20 or 25 minutes during our evening journey.

The waters in the canal had probably receded during the time we spent collecting fuel in Ratwal, and as I learnt these water levels were ever fluctuating depending upon the discharge from the barrage at Valmikinagar, where the river entered into India from the Nepalese side. But even as the jolty boat ride in the stream was introducing us to newer complications at every small interval, the spot light and headlight of the boat which was supposed to guide us well in the dark started attracting different species of insects from all over the neighbouring diara.

Rains had accentuated the insect population in the region which was seldom felt while travelling in the day time when the insects lay hidden in the grasses. But at this hour the experience was traumatic with them swarming the boat lights in thousands being attracted by the sudden lights in the otherwise dark surrounds.