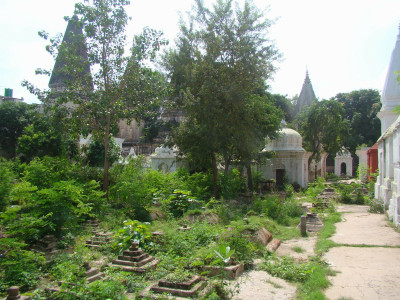 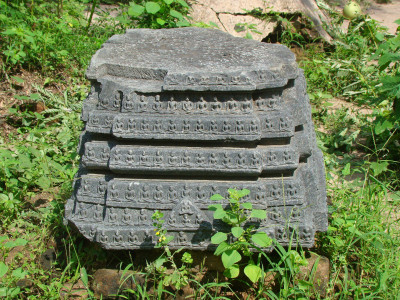 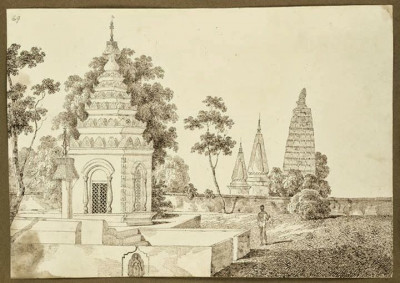 Goasin Ghamandi Giri belonged to one of the seven orders of the Saivite Sanyasins of the Shankaracharya’s school. It is said, in the course of his pilgrimage, Ghamandi Giri came to the Mahabodhi premises in about 1590 AD, and was so attracted by its solitude that he selected it as the place of his religious devotion. He was the first Mahant or founder of the Hindu Math or monastery. In about 1727, the then Mahant received,  by royal firman from the Mughal emperor Muhammad Shah, the grant of the village Tardih where the ruins stood, and thus acquired possession of the shrine. Ghamandi Giri, the founder of the Math, was buried in front of the Mahabodhi Temple, and a shrine or Samadhi was erected over the spot, which still exists. To the east of the Mahabodhi temple is the Math of the Mahants which is still under occupation. Inside the Math area are a number of Hindu temples built in the course of the last two or three centuries. There are also the samadhis of the other Mahants and Sanyasins.


“Before the porch of the great Mondir is a stone containing the impressions of the feet of a Buddh, and called Buddh Pada, and round it have been heaped many images. Among these, one representing a Muni has a short inscription under its legs; another has an inscription round the head. A male figure with two arms, having the figure of a Muni sitting on his head, has an inscription round his head and another below his feet. Adjacent to the Buddha Pada is lying a stone with a transverse inscription.”

Cunningham (1861) mentioned about the Buddha Pada as being the same as the one referred to as Vishnu-pad in the Amara Deva’s inscription. He mentions that originally the feet may have been those of the Buddha, which, on the decline of Buddhism, were quietly appropriated to Vishnu by the accommodating Brahmins. There is a short Nagari inscription on the east side of the stone, giving the date of Saka 1230 i.e. 1308 A.D.