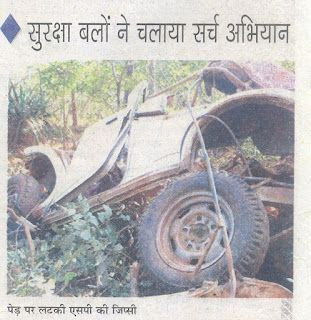 I can never forget my #FirstDay in the Field (5th January, 2005) as an IPS Probationer. The times were quite turbulent with Assembly elections just round the corner, when I had reported on 26th December, 2004, at the Police Headquarters in Patna for further field training after having completed the first phase of Compulsory Training at the SVP National Police Academy, Hyderabad.

After meeting the Senior Officers at the Police Headquarters in Patna for about a week, I reached Bhagalpur on the night of 4th January, 2005. My first day in the Field was on 5th January, 2005, when I was being introduced to and briefed about various learning aspects of Field training by the then SP, Bhagalpur. The weather was quite cold and pleasant, and I was mentally preparing for properly settling down in Bhagalpur for the next few months.

After moving around several offices in the day and calling on district officials, I was sitting in the residential office with the SP at around 6.00 p.m. We were having a general discussion about various topics like my educational background etc., when I noticed that a phone call suddenly changed the atmosphere. The SP almost screamed and got up from his chair in a state of shock. Within seconds I learnt that the SP, Munger (neighbouring district) had been killed in a Landmine blast somewhere in the forest near Bheembandh. As the news spread around, there was a terrible sense of gloom in all eyes.

Along with the IG and DIG, I and the SP moved for Munger Police Line immediately afterwards. All the way various thoughts kept erupting in my mind. We reached Munger around 9.30 p.m. and stayed all night in the Police Line Office. New to the field, I was watching the happenings around. Never had I thought of such an experience on the very first day in the field. My training had begun on a very sad note and the memories of the night and the following day still remain.