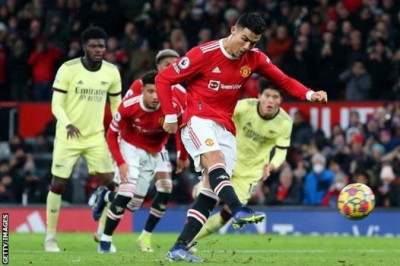 Cristiano Ronaldo became the first player in history to score 800 top-level career goals when he struck twice for Manchester United in a 3-2 win over Arsenal on Thursday.

Ronaldo's double took him to 130 goals across two spells for United, adding to five for Sporting Lisbon, 450 for Real Madrid, 101 for Juventus and 115 for Portugal.

He is the all-time top scorer in men's international football, in the Champions League and for Real Madrid.

The Premier League's all-time top scorer Alan Shearer said on Amazon Prime Video: "You just have to sit there and say 'wow' and applaud the guy.