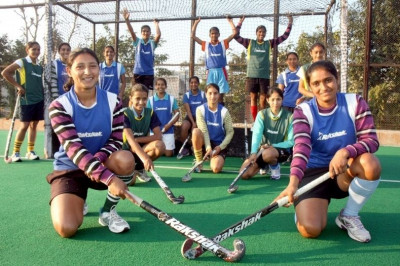 Can’t wait to read more about them! Also this is a very cool picture 💪🏽💪🏽

A perfect example of women empowerment

What an inspirational story.

Looking forward to read more about such inspirational women

Write To Be You #WriteToBeYou

Shahbad Hockey– Lookout this space for the inspiring stories of women hockey players from Shahbad, who overcome all odds to make the country proud

Over the years, Shahbad, a town in between Kurukshetra and Ambala, on the Delhi-Chandigarh Highway, has emerged as the country’s powerhouse in women's hockey.

The hockey has not only given world recognition to the town by producing a number of international women players, but also worked as a vehicle for uplifting the socio-economic status and women empowerment.

The hockey girls, largely coming from humble backgrounds, have been strengthened because of this sport. It helped them (referring to the women hockey players hailing from Shahbad) leading a decent lifestyle and in many cases, the earnings of a girl because of hockey, is greater than the entire earnings of all the men folks of the family.

The town has given five captains to the Indian women team, including the current skipper Rani Rampal.

Coach Baldev Singh, who is a force behind Shahbad’s success in women’s hockey, got the country’s highest coaching honour Dronacharya award. Apart from that, three women players from Shahbad have been awarded with the Arjuna award – Surinder Kaur, Jasjeet Kaur and Rani Rampal.

In this space in Pixstory, we will share the inspiring stories of women hockey players from Shahbad, who fought poverty, overcame odds, to make the country proud at the world-level. It will be a firsthand account.

The space is managed by a storyteller, who has followed the life and achievements of the hockey girls from a close quarter from the last one-and-half-decade.