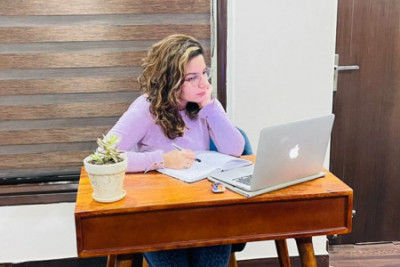 While constantly questioning and navigating the effectiveness of virtual art-based therapy, Sharma’s had to create new strategies to maintain a work-life balance between the professional and personal.

"I could have a fight with my husband and just have a therapy session in the next minute, so the time to reboot becomes very less," Sharma explains.

The work-life imbalance also creates a welcoming environment for self-doubt to thrive in.

"There was this struggle from inside: Am I doing enough personally? Am I doing enough professionally? And then this constant guilt, of not doing justice to the both of them, that my client should not suffer just because something personal took longer time than it had to," Sharma said.

Getting a control over self-doubt by learning the “art of letting go” took a lot of time and practice that involved setting and asserting boundaries.

"You start to realize that you cannot do everything,” Sharma said.

While Sharma has found ways to set boundaries in her work-from-home setting, she can’t always offer the same control to her clients, who often have someone walking behind them during a therapy session.

“My profession is very much connected to the people I speak to or deal with, they might not have those boundaries in a similar way,” Sharma said. “Things like confidentiality, they just go for a toss – sometimes that still remains one of the concerns.”

But in some ways, access has increased: a virtual space can be safer than the traditionally physical space offered before, and Sharma has noticed an increase in the willingness to seek therapy, as compared to the internalized stigma before.

"Therapy has somehow become more accessible to some people,” Sharma said. "Not all people consider the therapy setting to be a safe space, for some people their room, their home is their safe space."

Sharma believes that the future of her work as an arts-based therapist holds a hybrid model that would make therapy more accessible by transcending the current technological barriers that exist.