Without a fresh new vision, the next Conservative prime minister risks leading their party to 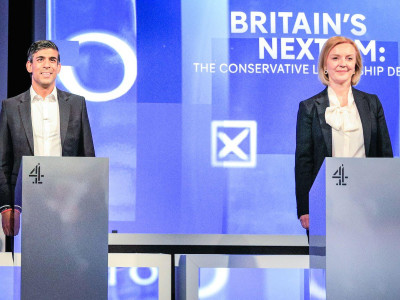 The Conservative party has got a problem. The problem can best be described as the coming together of a series of problems that will make re-election harder.

In the run-up to the next election, voters will have the ongoing cost of living crisis at the forefront of the their minds. People are struggling financially as a result of out-of-control energy prices and are harbouring increasing resentment towards the utility companies profiting from their payments.

There is a general sense that the party of government is in need of a wholesale ideological renewal of the kind best conducted while in opposition. The new leader will seek to present a fresh face and new perspective. However, both Liz Truss and Rishi Sunak served under Boris Johnson and the air of continuity may taint those attempts to revitalise if a positive vision fails to emerge.

Parties who stay in power for long periods often suffer the signs of governing degeneration. Attempts can be made to press the reset button by changing leader in government (as the Tories did in 1990 and Labour in 2007). But the fundamental problems of internal disunity, resentment at broken promises of promotion to backbenchers, and lack of forward-looking grand vision can prevent the attempt from working. The problems facing the old leader return to overshadow the new.

After more than a decade in power, it’s difficult to see how the Conservatives can turn things around and return with a working mandate at the next general election without a grand positive vision. At present, all the government is selling is bad news on the economy, bad news on social policy, and bad news on Britain’s place in the world. Where’s the hope?

Time to ditch Thatcherite thinking
If they do lose power, the Conservatives will need to ask some searching questions about their performance in government.