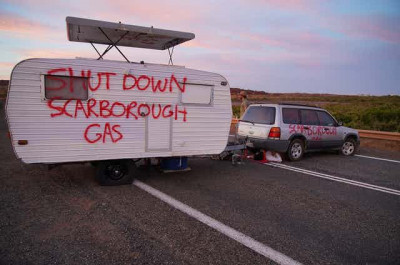 A major new climate case to stop Woodside’s controversial Scarborough gas project going ahead has been filed by the Australian Conservation Foundation (ACF) in the federal court this week. ACF lawyers argue that the potential for the project’s emissions to harm the Great Barrier Reef must be assessed.

While the case has only just begun, as legal experts, we see this as a landmark challenge.

Gas is often presented as a “transition fuel” towards a green economy. Woodside argues the Scarborough development will help to reduce global emissions by replacing coal with “cleaner” gas. But scientists say gas must rapidly exit the global power sector to keep the Paris Agreement’s 1.5℃ temperature goal in reach.

ACF’s case against Woodside will be an important test of Australia’s new climate credentials. It will also fundamentally confront the question: what role, if any, will gas play in the energy transition?
The next frontier of climate litigation is gas
Australian climate lawyers are no stranger to challenging approvals for coal mines in the country. The ACF’s case brings similar strategies to the Scarborough gas project.

Woodside’s Scarborough-Pluto gas project proposes to drill and pipe gas from off the coast of Western Australia, mainly to supply natural gas to countries in Asia.

The company has said their oil and gas projects are consistent with their science-based, Paris-aligned reduction targets for scope 1 and scope 2 emissions, which include emissions directly released from the project, such as leaking methane. But this doesn’t include the scope 3 emissions, which are associated with burning gas by overseas customers.