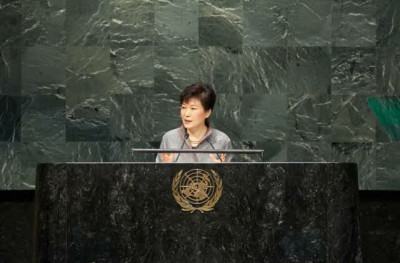 According to the Korean government, former South Korean President Park Geun-hye is one of the over 3000 people being pardoned in the New Year presidential pardon.

Park has been serving a 22-year term since March 2017 on charges of corruption and abuse of power. She was impeached in 2016 after which a trial was conducted. "We should overcome the pain of the past era and move forward into a new era. Instead of being trapped in the past and fighting each other, we should gather forces to move onto the future," President Moon Jae-in said in a statement after the Justice Ministry released the list of special pardons. One of the factors considered to grant the pardon was Park's "deteriorating health." (http://www.koreaherald.com/view.php?ud=20211224000212)

The pardon will come into effect from Dec. 31.

It has been seen as a "political move" by several leaders of the opposition. Some leaders of even the ruling Democratic Party of Korea are concerned about the pardon saying that the party members would be disappointed. The opposition People Power Party while welcoming the pardon feels that Park has been granted pardon to divide the conservatives in the country. (http://www.koreaherald.com/view.php?ud=20211224000544)

The presidential elections in the country are a little over two away, and it is bound to have political calculations and implications.

The People Power Party's candidate is former Prosecutor General Yoon Suk-yeol who played an important role in bringing down Park. Yoon has welcomed Park's pardon. In the meantime, Lee Jae-myung, the ruling party's presidential candidate who had opposed any pardon a few days back has now said that he "respects" Moon's decision.

The granting of pardons has been publicly discussed for months now, and it was widely expected if Park was pardoned, so would the former President Lee Myung-bak. But Lee was not on the pardoned list.

Koreans are divided on the issue. A recent Gallup Korea said that while 44 percent of respondents favored pardon for both the former presidents, 48 percent were opposed to it. (http://www.koreaherald.com/view.php?ud=20211224000544)

Parties analyzing the impact of amnesty on presidential election:
https://www.koreatimes.co.kr/www/nation/2021/12/356_321124.html