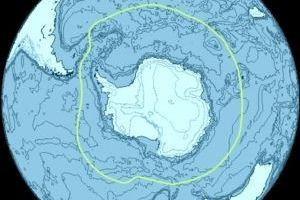 There are five oceans on the planet, the Pacific, Atlantic, Indian, Arctic and Southern, but the last one faces an identity crisis of sorts. Many geographers hold it to be part of the three big oceans, but some scientists have recognized it as a distinct entity. Among the latter, there have been different preferences on naming it – Southern, Antarctic or Austral. National Geographic, which had avoided recognizing it so far, has now updated its policy, and called it ‘Southern Ocean’.

Though folklore counts seven seas, geographers count four/five oceans. There are no demarcation lines in the body of water enveloping the earth; it is one World Ocean. But appreciating the specific characteristics of various zones among them and water circulation patterns, geographers have named the oceans. Captain James Cook’s voyages in the 1770s first discovered that Antarctica, home to the South Pole, is surrounded by waters. But the watery part below 60 degree south latitude took a long time to carve an identity of its own. It was only in 1999 that the US National Oceanic and Atmospheric Administration (NOAA) recognized it as the fifth ocean [https://oceanservice.noaa.gov/facts/howmanyoceans.html], and the US Board on Geographic Names called it ‘Southern Ocean.’ [https://www.washingtonpost.com/science/2021/06/09/fifth-ocean-national-geographic-southern-ocean/] The next year, the International Hydrographic Organization (IHO) too debated its new status, but there was no consensus among its members. Argentina (one of the countries closest to it) objected to considering it as a separate ocean, while the remaining members remained divided on two names. The IHO, however, decided to call it ‘Southern Ocean.’ [https://www.thoughtco.com/the-new-fifth-ocean-1435095]

Yet, considering the dispute, National Geographic in its maps, published in the prestigious magazine as well as in its popular TV and classroom programs, did not identify as such, and indeed put a disclaimer that its status and name remain disputed. On World Ocean Day, June 8, the venerable institution finally updated its policy [https://twitter.com/NatGeo/status/1402276146671128591] and will now show ‘Southern Ocean’ on its maps. The move, the National Geographic Society hopes, will help in its conservation efforts, highlighting the unique nature of its ecology. [https://www.nationalgeographic.org/projects/pristine-seas/]