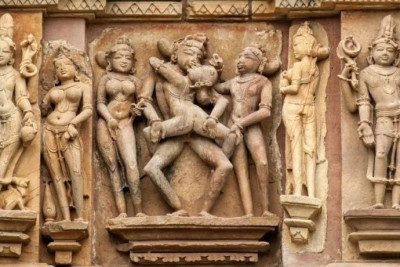 Only a few months ago, members of a Hindu outfit burnt copies of the Kamasutra in Gujarat, stating that they are obscene and hurt religious sentiments.

If these sculptures and images were indeed as problematic as it’s being made out to be, would they have existed in the first place, for thousands of years or even been created?

Tantra is perhaps the only philosophical tradition in the world that has made attempts to elevate sex to a spiritual dimension.

If that is the case then we need more Khajurahos and Konarks, everywhere.
What better way to address sexual repression and frustration than by sending people to look at these sculptures and meditate.

Perhaps then we may also not need so many doctors to help people deal with their sexual difficulties.