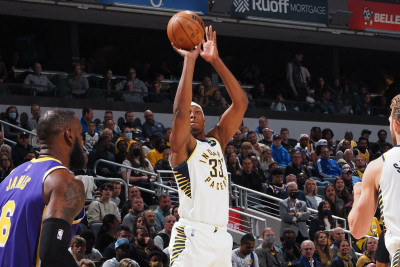 With Talen Horton-Tucker now eligible to be traded, the Los Angeles Lakers and everyone paying attention to them are now squarely in trade rumors season.

This week in the “Lakers Lounge,” Harrison Faigen and I broke down everything we know to this point and the kinds of rumors we think might start swirling as we get deeper into one of the busiest parts of the year.

To start, though, he and I gave our thoughts on Lakers updating-but-not-really-updating Anthony Davis’ injury situation. Kicking the can down the road is perfectly reasonable on this kind of information because of everything at stake, but also injuries have been so brutal that it’s not to be nervous about every little ding every player picks up this year.

Everything starts with Talen Horton-Tucker. He’s the Lakers’ only decent-sized movable contract, and is young enough to maybe convince a team to buy relatively low on his potential. Combine him and Kendrick Nunn’s $5 million and you can trade for a player in that $18-$20 million range. Add the Lakers’ 2027 first and you have a legitimate trade package.

To be clear, though, that pick should be held onto incredibly tightly, because it figures to convey after the LeBron James era, when things could look very different for this Lakers organization. No offense to Rob Pelinka and the rest of the brain trust, but betting against them with James out of the picture feels like a pretty smart gamble.

Once Harrison and I sussed out what we could with THT, we dove into some of the names already linked to the Lakers, as well as some guys either the Lakers or fans would like to see traded before February 10. Per our tracker, the names like Jerami Grant, Myles Turner and Gary Trent Jr. have already come up. For a little extra fun, we also discussed guys like Harrison Barnes and Josh Hart.

To wrap things up, we ranked those guys in order of who we’d most like to see the Lakers trade for, and then predicted who we think is most likely to don the purple and gold in February, before finally delving into a very weird storytime segment.