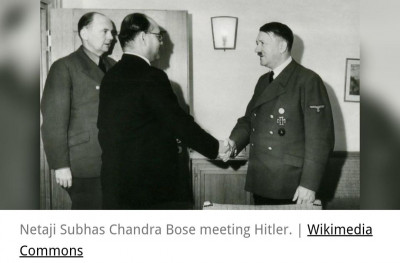 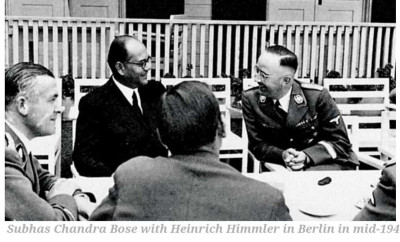 “Let there be no blemish on my moon,” said Emilie, punning on his name, Subhas Chandra ('Chandra' meaning 'moon').
“What did you say?”
“You are going to meet Hitler, after all, that’s why,” replied Emilie.
Subhas laughed. He was touched by her concern that his flawless image should remain so.

But, Netaji was a little perplexed. International diplomatic protocol required that when meeting a head of state, a suitable gift must be offered. But Hitler was such a complex, multifaceted personality – what would be a suitable gift for him, he wondered. Finally, he consulted Emilie.

“Take a rare book or a nice oil painting. They say Hitler was a painter earlier”, Emilie suggested.
“Those colours have long since fled. Let me see. I’ll think of something”, Subhash mused.

After changing the dates twice, 29 May 1942 was fixed. It was to be a meeting of people with conflicting views and at cross purposes. The Führer was camping at his military base in Rastenburg in distant Prussia. On 28 May, Netaji flew to Prussia from Berlin by a special aircraft. Keppler and Adam Trott went with him. Since Netaji was absolutely certain of his mission, he was not in the least apprehensive on his way to the lion’s lair.

Ribbentrop waited on a remote airstrip to receive Netaji. He was accompanied by several officers from Hitler’s inner circle, all of them eager to meet this leader from India.

Ribbentrop had arranged a banquet that night. It was obvious that Hitler had instructed his officials to extend utmost courtesy to the visiting dignitary.

The momentous meeting took place in Hitler’s study at the following evening. The study was exquisitely furnished, but could seat only a few. Foreign Minister Ribbentrop, Ambassador Havell and Hitler’s personal interpreter, Schmidt, were already seated in their respective places. On the wall in front were two large maps – one of Europe and Asia and the other, a similar one that marked out Germany’s war fronts.

As Netaji stepped into the room with Adam Trott, Hitler welcomed him with a flourish, “The leader of the Azad Hind!” and shook hands with him. They took their designated seats.