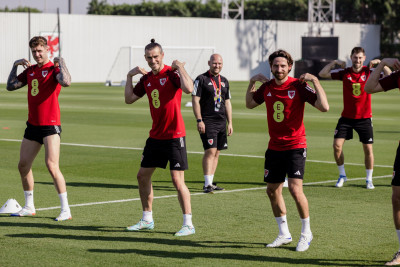 Wales manager Rob Page has a selection problem in midfield ahead of the Dragon’s second Group B match against Iran.

Midfielder Joe Allen travelled with the final 23-man squad as an injury doubt. However, the 32-year-old has been training with the squad before the Iran fixture and is seemingly fit to feature.

As an experienced member of the Wales squad, Allen’s presence will be a huge boost for the team. But, the midfielder's return also poses a selection headache for Page leading up to the Iran fixture.

In the 1-1 draw with the USA on Tuesday, Page started Harry Wilson, Aaron Ramsey and Ethan Ampadu in a 3-5-2 formation.

The trio of Wilson, Ramsey and Ampadu was solid, but there was a lack of creativity and willingness to get forward in the first half. In addition, US midfielder Christian Pulisic was able to drive through the midfield area and play in Timothy Weah for an easy finish.

Also, Wilson was used as a makeshift central midfielder as he usually plays further forward as a winger for Fulham. This could lead to Allen coming in for Wilson to provide more composure and control on the ball to relieve the pressure when in possession.

Alternatively, Page could sacrifice the more defensive Ampadu and field a more technical, forward-thinking blend of Ramsey, Allen and Wilson.

It is a must-win match for the Dragons, with a tough test against England in their final group match next Tuesday. Although, even with Allen fit, the likelihood is that Page will stick with the same starting XI used for the USA match, possibly with the addition of Keiffer Moore up front in place of Dan James.

But, Allen will be expected to feature at some stage, possibly getting minutes if Wales are left chasing the game or a win late on.