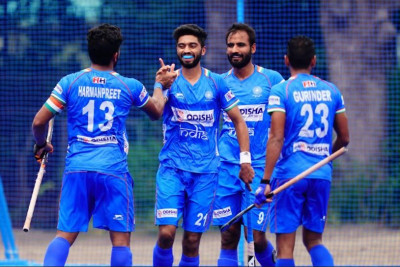 New Delhi: Indian men's hockey team forward Shamsher Singh, who played a crucial role in India's Bronze Medal-winning campaign at the Tokyo Olympics, expressed that he is very fortunate to have had the chance of playing in the biggest sporting event during the nascent stage of his career. The national side defeated Germany 5-4 in the Tokyo Olympics Bronze Medal match on 05 August 2021 to end a 41-year Olympic Medal drought.

"The Tokyo Olympics is always going to hold a special place in my heart. I am so lucky to be part of an Olympic Bronze Medal-winning team at such an early stage of my career. I also know that this is just the beginning for us as a team. We have the belief that we can do even better in the future and we are going to work towards our goals in the upcoming years," said the Forward, who scored a goal against Japan in the Tokyo Games.