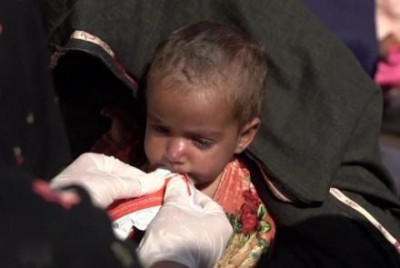 The United Nations Children's Fund (UNICEF) highlighted the severe condition of Afghan children and estimated that "one in two children under five will be acutely malnourished in 2022 due to the food crisis and poor access to water, sanitation and hygiene services."

"Children across Afghanistan are increasingly vulnerable to disease and illness due to the deadly combination of rising malnutrition, an unprecedented food crisis, drought, disruptions to vital health and nutrition centers, lack of access to and poor quality of water and sanitation services, and crippling winter weather," UNICEF said in a recent report.

As Afghanistan is overwhelmed with a severe crisis that has affected the country in various ways, the humanitarian organization has repeatedly voiced concerns over the situation of the people.

"You see, the number of malnourished children is rising. The surge in malnutrition is not the (challenges) of the past two or three months...it may be because they could not come to us. Maybe people have not had jobs to bring food," said Dr. Mohammad Sadeq, head of the Mirwais Hospital in southern Kandahar province.

The UNICEF said that more than 66,000 cases of measles have thus far been reported in 2021 Afghanistan.

"There have also been outbreaks of acute watery diarrhoea, malaria, and dengue fever. In addition, four cases of wild poliovirus type 1 (WPV-1) have been confirmed this year," the report said.

"We are approaching a critical juncture for Afghanistan's children, as winter brings with it a multitude of threats to their health," said Abdul Kadir Musse, UNICEF Afghanistan Representative, as quoted in the report.

"There is no time to lose. But, without urgent, concerted action - including ensuring we have the resources to deploy additional cash transfers and winter supplies - many of the country's children will not live to see spring."

The Ministry of Public Health promised to improve the health system in the country.

"The Ministry of Public Health is trying to improve the health sector so the number of malnourished children can drop," said Javid Hajir, a spokesman for the ministry. "We also launched a campaign of public awareness."