UNHCR calls for more aid for forcibly displaced in Afghanistan 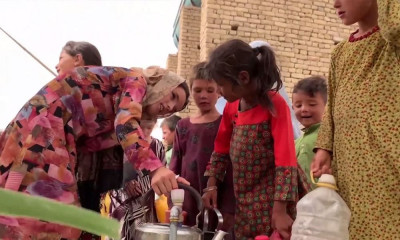 UNHCR, the UN Refugee Agency, has appealed for much more support amid acute and rising humanitarian needs for 3.5 million people displaced by conflict inside Afghanistan – including 700,000 who were displaced in 2021.

In a statement released on Friday, UNHCR said that the forcibly displaced are facing a lack of insulated shelters, warm clothes, insufficient fuel for heating, and inadequate amounts of food and medical supplies as temperatures begin to plunge below freezing.

“The humanitarian crisis is escalating daily in Afghanistan. Hunger in the country has reached truly unprecedented levels. Nearly 23 million people – that’s 55 percent of the population – are facing extreme levels of hunger, and nearly 9 million of them are at risk of famine,” the statement read.

The organization emphasized that providing food supplies is an “immediate priority” to help avoid widespread starvation in the country.

“This year, UNHCR has assisted some 700,000 displaced people across the country the majority since mid-August. The race is on to reach more. Currently, we are able to reach nearly 60,000 people every week.”

“Further resources are urgently needed for the most vulnerable -single mothers with no shelter or food for their children, older persons who have been displaced are left to take care of orphaned grandchildren, and those taking care of loved ones with special needs.”

UNHCR has been bringing in relief supplies by road through Afghanistan’s neighboring countries and through humanitarian airlifts.

The organization noted that five more flights carrying UNHCR winter supplies from its global stockpiles in Amman are scheduled next week.

“UNHCR support will continue throughout the cold season until February 2022 to help forcibly displaced families cope with the extreme conditions. The response includes core relief items, such as thermal blankets and warm winter clothing. Shelters are being repaired and reinforced, while people are also being provided plastic sheeting and insulation materials to help weather-proof their shelters,” the statement said.

The organization added that vulnerable families are also being provided with cash assistance to meet additional needs during the coldest months, such as fuel for heating.