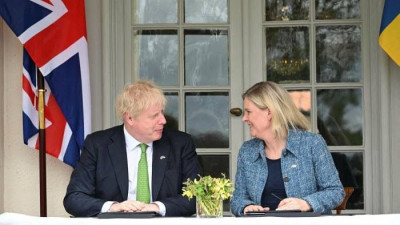 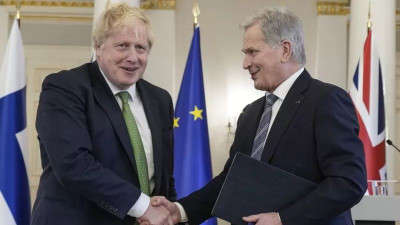 Russia responds to Finland in the decision to seek NATO Membership!

Hard to find the way back on the world stage for Putin: Boris Johnson

The UK by mutual security deal has agreed to come to the aid if Finland or Sweden come under attack. amid debate about them joining Nato, Boris Johnson visited both the countries.

‌Mr Johnson and Swedish PM Magdalena Andersson said co-operation was "even more important" given Russia's invasion of Ukraine.
‌
‌In a press conference with Finnish President Sauli Niinistö, Mr Johnson said the decision was reflective of the "extreme difficulty of the times we are in".PM has also said that the type of aid to the nations will depend on their demand by them. He believes in the agreement with intensifying security relations.
‌
‌Finland and Sweden are threatened by Russia to join NATO. This agreement with the UK that ensures safety puts NATO back on the table for The countries.
‌
‌Finnish and Swedish membership will make Nato more strong too - improving its eastern flank and presence in the Baltic Sea. And the Kremlin has threatened retaliation.

Some fear it might deploy targeted nuclear weapons. But Finnish diplomats believe Russia has its military hands full in Ukraine and that it will rather focus on cyber and disinformation campaigns. Also, how can we allow a nation to capture others as they refuse to obey? Russia and its dictator have to stop.