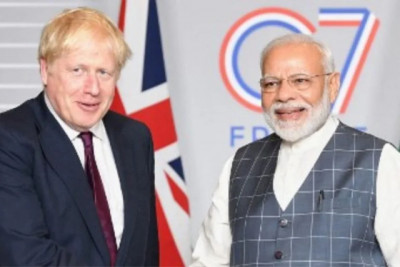 As the United Kingdom opens up to Indian travellers jabbed with two doses of Covishield or any other UK-approved Covid-19 vaccine, British Prime Minister Boris Johnson spoke to Prime Minister Narendra Modi on Monday morning.

On a call between the two leaders, topmost was their discussion on priorities regarding the shared fight against coronavirus and the importance of cautiously opening up international travel.The two leaders agreed that UK’s recognition of Indian vaccine certification was a welcome development to that end,according to a press release issued by the UK government.

After a major vaccine certification row between the two countries, the UK on October 7 announced that Indian travellers will not have to quarantine upon arrival to UK if they were either fully vaccinated with Covishield or any other UK-approved Covid vaccine

The row was mainly after Britain issued a travel advisory, which included Covishield in its list of accepted vaccines,but still required Indians vaccinated with it to quarantine for 10 days upon arrival.The UK at the time said it did not accept the CoWIN certificate.

Apart from Covid-19,the two leaders also discussed the strength of UK-India relationship and welcomed the progress made on the 2030 Roadmap since it was agreed by Johnson and PM Modi in May.This includes trade and defence.The leaders are looking forward to the upcoming visit of UK Carrier Strike Group to India and deepening of UK-India strategic ties.

The leaders also talked about the current situation in Afghanistan and agreed on the need for a coordinated international approach to engagement with the Taliban, emphasising the importance of upholding human rights in the country.