UFC releases Hollywood-esque promo for Makhachev vs Volkanovski in Australia, it's truly 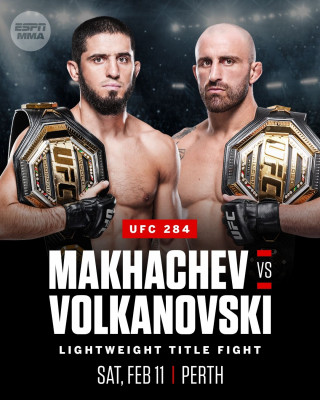 UFC releases Hollywood-esque promo for Makhachev vs Volkanovski in Australia, it's truly electrifying

The UFC's production team have done it again.

Following a near four-year absence, the UFC is finally returning to Australia with one of the biggest bouts of the year.

Pound for pound king and hometown hero Alexander Volkanovski is jumping up a division, taking on lightweight champion Islam Makhachev.

If successful, the Aussie will become a two-weight world champion, joining an elite but short list of fighters to hold two belts simultaneously.

But standing across the cage from him is a monster by the name of Makhachev, who won't roll over easily.

This champion vs champion fight promises to be one of the most exciting scraps of the year and it'll all be played out in front of a packed-out RAC Arena in Perth.

Given the magnitude of the event, it was only fitting that the UFC came up with an electrifying promo video to match and the editors certainly didn't disappoint.

From the Hollywood-style dramatic music to the cuts of the two champions roaring into the camera lens, the promo is enough to get even the most casual of fight fan out of their seat.

It's being pitched as not just the battle for the lightweight strap, but also for the number one pound-for-pound spot - and that's hard to deny.

"Australia, buckle your seat belts, this is MMA at the highest level," Daniel Cormier concludes.