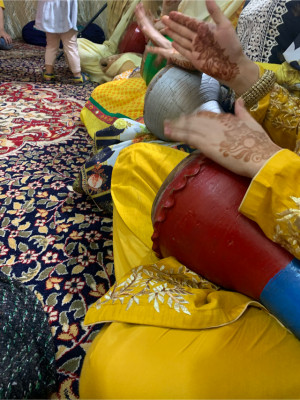 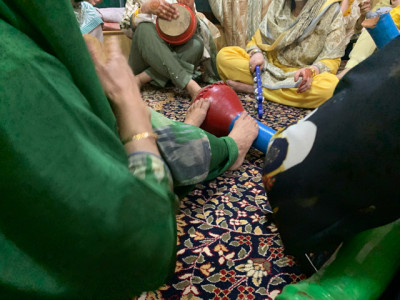 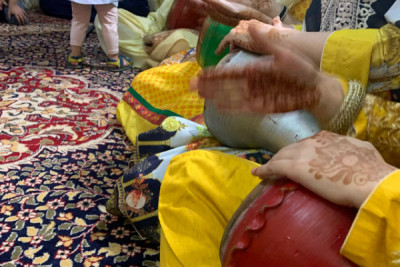 Wedding blog- the mehandi morning and the traditional kashmiri dress

Sounds really fun! I love all the colors

#womenatleisure :) The weddings I have seen in Bundelkhand are similar in this aspect...hordes of women, all kinds of aunties, grannies, friends get together, play the dholak and sing some of the cheekiest numbers I have ever heard...my ears had gone red listening to the ribaldry!

Every kashmiri women ( accept for me ofcourse) knows how to play tumbaknari- a mini drum which is cast in a clay funnel like case.
Although Kashmir is home to many traditional musical instruments the most important being santoor and Rabab, tumbaknari however holds a unique distinction and is being used since ages.
U don’t need to be a musician to play it.
Just know a few beats and play to the rhythm .
The beats are rhythmic and rustic at the same time .
The very sounds and beats produced by tumbaknari inspire one and all to participate in the night of song and dance .
Mostly played by women in weddings, the rhythm coming from the tumbaknari and the and the beautiful mehandi laden hands are quite a sight most on the mehandi night.

Weddings become enthralling because of tumbaknari.
Tumbaknari like many other traditional things in kashmir is believed to have evolved from
Similar instruments in Middle East.
Many folk artists are trying to make the art global.