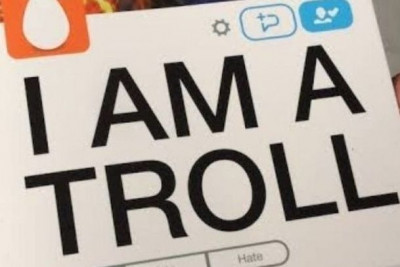 From the book cover of 'I AM A Troll'

If your opinion on social media doesn’t go well with a political party or religious hardliners, be ready for trolls. And if it’s a woman, especially a journalist, rape threats and character assassination come at the drop of a hat.

While during election times, all political parties vow to ensure women rights and talk about their safety, but whenever the troll army attacks female journalists for expressing their opinion, which goes against the ideology of a particular political party, no one from that party’s ranks shows guts to come up in the open and criticise the derogatory language or rape threats.

But yes, if the troll army of another political party is involved, they immediately roll out a press statement criticising the act.

The list of women journalists trolled is endless, as they are on the receiving end on a daily basis.

“Women journalists are the worst affected by trolling because within no time the trollers stoop to issuing rape threats and causing physical harm, besides hurling abuses. Political parties have women trollers too to cause maximum damage to women journalists. And what is worse is that much of this trolling goes unreported,” says Chitleen Kaur Sethi, Senior Associate Editor, The Print.

Recently, Chitleen and another Chandigarh-based journalist, Taruni Gandhi, were trolled for posting a video clip in which AAP's Punjab co-in-charge Raghav Chadha was seen putting on the floor the microphone of a journalist, who arrived late at his press meet in Chandigarh.

“After I was trolled on Twitter for standing up for a co- journalist, I approached the National Commission for Women. For all women journalists out there, I would suggest that the moment they are trolled, they should take screenshots of the trollers’ IDs with their messages, because many of them delete these to come out clean,” says award-winning journalist Chitleen, who has been covering Punjab for the last two decades.