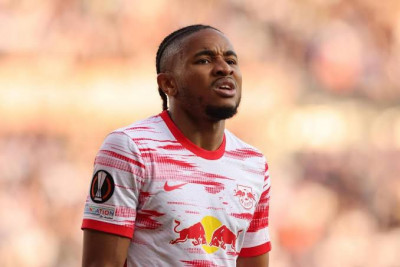 Red Bull Leipzig's 5"7 striker Christopher Nkuku is one of the main attractions of the following summer's transfer market. While Leipzig are trying very hard to make sure the Frenchman continues in Germany, a move away from the Bundesliga does seem likely. Surprisingly for Nkuku, Bayern Munich are not one of the names cited as possible destinations even with Robert Lewandowski's impending departure.

Paris Saint Germain however, are in the race and a return to his former team wouldn't be discarded unless a better offer presents itself. Nkuku spent more than 5 years in PSG's youth ranks before Leipzig swooped in with a €13 Million deal in 2019. Ever since, Nkuku's numbers have only improved. This season alone, he recorded 20 goals and 13 assists in 34 Bundesliga appearances. To add to that, his record in the Champions League is phenomenal too — 7 goals in 6 games.

Former Arsenal and Barcelona striker Thierry Henry sung the forward's praises this week, complimenting his decisiveness. "Yes I do love watching him. Goals and assists. He is just having fun this season. But he is adding goals this year.

The Frenchman recommended Mikel Arteta's Arsenal team to add him to the setup next summer.

"He’s in the national team now. His confidence… the world wants him."

Following a French call-up, Nkuku will now be asked to prove himself on the biggest stage of them all — this winter's FIFA world Cup. To assume that he continues with his lethal form going into the tournament wouldn't be a difficult assumption to make. Unless something does go wrong of course, Nkuku's price will shoot up the following summer. While Arsenal hasn't yet emerged as a possible destination, Nkuku could well be on his way to the Premier league or another European team this summer.