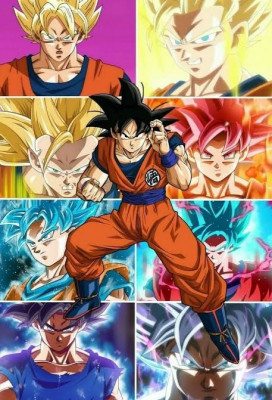 I just stopped watching with DBZ...

The concept of transformations in Dragon Ball has always been its defining aspect, particularly Super Saiyan with its long spiky rigid golden hair with lightning emitting from its sheer power and the green eyes and drastic increase in power. Then we had Super Saiyan 2, SSJ3, SSJ4 (GT).

Then we had Dragon Ball Super where all the previous transformations were rendered obsolete as the power levels stepped into god territory, so we had SSJ Red, SSJ Blue, Rose for Goku Black, and of course the Legendary SSJ for Broly.

But now the transformations are not limited to Super Saiyan level anymore, hell we have Golden Frieza, Black Frieza, Beast Gohan and Orange Piccolo! What else now, Violet Gotenks?! Or Ultra Powered Super Muscled Master Roshi with a 20 pack who has grown up to 20 ft?! Or perhaps Megalodon Krillin?

The more Dragon Ball Super has been progressing, the more out of hand and ridiculous these transformations are becoming.

The whole concept of transformations was to inspire a feeling of awe and marvel among the audiences, to witness just how powerful a character became either after going through a massive period of gruesome training or giving into his emotions, entering a passion fueled sense of rage and hopelessness and then powering up unconsciously to a new power level.

You know like Goku or Vegeta’s first Super Saiyan, Gohan going SSJ2. Even DB Super, though it had horrible animation, it was not bad initially when it came to transformations, the concept of SSJ Blue was a neat one and looked and felt great.

Though now these endless transformations have turned Dragon Ball into a fashion show with pretenses for fighting and absolutely no emotion.

At this point Dragon Ball is just a fashion show with loud noises and power ups that can sell toys and provide you with 20 minutes of entertainment, but not give you the same emotional connect or chilling sense of awesomeness that you once got in DBZ.