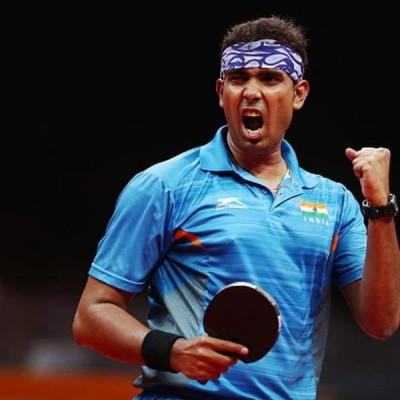 Achanta Sharath Kamal was born in 1982. In 1983, India won the cricket world cup and by 1990, serious money had started flowing into cricket. Cricket players became Godlike to a populace that had no knowledge or appreciation of any other sport.

I am not sure how Sharath Kamal views this craziness for cricket, and how he motivates himself, but I guess as a true professional, his first duty is towards the sport that he has chosen. Public adulation and financial rewards are just cherry on the cake.

At 41 years, and 6 feet 1 inch tall, Sharath Kamal looks like an earnest Professor. He does not smile or emote much. He just stands there, acknowledges a good shot, and moves on.

A couple of days ago, just before his mixed-doubles match he found his young partner, Akula Sreeja, crying in the room because she had lost in her quarterfinal match. He asked her to not let defeats affect her and play the next match as best as she could.

Yesterday, the pair of Sharath Kamal-Akula Sreeja won the gold, beating the Malaysians, who have been a real thorn in badminton and table-tennis.

And today he plays his gold medal match in men's singles.

Sharath won his first gold in the commonwealth games in 2007.