The Multiverse of Pronouns🤓 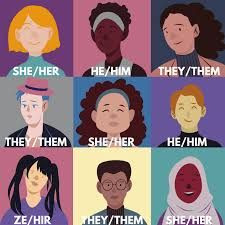 Gender or sexuality is a very fluid term. Some people might identify differently from the sex assigned at birth. These identities can include transgender, nonbinary, or gender-neutral.

Only one can identify with their gender and this can also change with time. People who identify out of a gender binary most often use non-gendered or nonbinary pronouns that do not gender specific. These include they/them/their used in the singular, ze (pronounced “zee”) in place of she/he, and hir (pronounced “here”) in place of his/him/her.

It's the personal choice of an individual to use the gender pronouns that they think fit their identity and these may or may not match with the general conception of a gender expression such as dress or behaviour(which is only a conception).

It is important to
Not assume another person’s gender or gender pronouns.

You can’t always know what someone’s gender pronouns are by looking at them, by their name, or by how they dress or behave.

Asking about and correctly using someone’s gender pronouns is an easy way to show your respect for their identity. Ask a person respectfully and privately what pronoun they use. A simple “Can I ask what pronoun you use?” will usually suffice.

Normalise the sharing of gender pronouns by actively sharing your own.

Apologise if you call someone by the wrong pronoun.

If you’ve not used gender-neutral pronouns such as “they” and “ze” before, give yourself time to practise and get used to them.