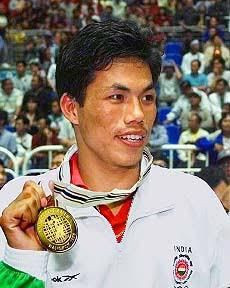 RIP. A true legend of the sport!

Padma Shri and Sydney Olympian Dingko passed away on Thursday (June 10, 2021) after a long battle with liver cancer. He had been fighting cancer since 2017. He was 42.

Dingko Singh was a product of Sports Authority of India’s Special Area Games scheme. Hailing from a remote village Sekta in Imphal, Dingko was born in a very poor family and was raised in an orphanage.

Dingko’s continental games gold made him a national hero overnight.

“It was in 1999, when I along with Vijender Singh and Jai Bhagwan were selected for the first time in any age group national camp. We were part of the sub-junior national camp. The camp took place at High Altitude Training Centre, Shilaroo, near Shimla, and the day our camp started, it was the second last day of the senior’s camp. We saw the bouts of Dinko Singh, Gurcharan Singh and Jitender Singh, who were the star boxers of that time. It was our first meeting with Dinko and we always wanted to be like him,” says Arjuna awardee boxer Manoj Kumar. “Dingko’s death is a great loss to the entire boxing fraternity. He was a great inspiration to all the boxers, of our generation and even for the coming generations,” adds Manoj Kumar.

Dingko’s first national title came during the sub-junior national boxing championship held in Ambala, Haryana, in 1989, and after that he never looked back. His first big win at the international title was at the King’s cup in Thailand in 1997 where he was declared the ‘best boxer’ of the tournament.

He was conferred with the Arjuna award in 1998 and Padma Shri in 2013. After retiring from Indian Navy he joined Sports Authority of India as a coach.