S Texas and its stubborn pro-gun laws are responsible for this havoc! 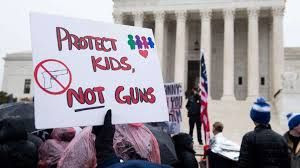 After every incident of gun violence, the lawmakers stayed still on any restrictive measures when it comes to guns. Let's not forget these lawmakers are the ones who took sudden disciplinary action against offenders. They did so in 2018 after a 17-year-old entered Santa Fe High School and killed 10 people. Then again in 2019, when two mass shootings weeks apart occurred in El Paso at a Walmart and then in Midland and Odessa after a dismissed worker opened fire. So why this meekness in gun laws? Even in the last two legislative sessions, Texas legislators have loosened gun laws, the most notable one being permitless carry in 2021. Citizens of Texas and around the US are asking Could this have been prevented and how can the state avoid yet another mass shooting?

Political reactions around the time of mass shootings remain the same for years. When a then-17-year-old student killed 10 people and injured 13 more in an art classroom in Santa Fe, near Houston, in 2018, Abbott called on state lawmakers to consider a “red flag” law that would enable state courts to take firearms off from a person who presents a danger to themselves or others.

A few months later, he backed away from the idea after Lt. Gov. Dan Patrick and gun rights activists drew a hard line against it. The state ended up passing laws more focused on boosting mental health resources and giving teachers more access to guns on public school campuses.

This pattern continued for years and Texas is one of the states in the US with the most relaxed laws on guns. Isn't this responsible for the havoc that has been caused in-country? Is damage control the aspect needed in this case or prevention? Are people being defended or killed with guns?