Team's performance in Tokyo is beginning of a new era in hockey: Dilpreet Singh 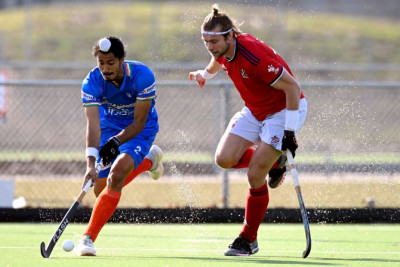 New Delhi: Star striker Dilpreet Singh has had a dream run so far with the Indian Men's Hockey Team. Ever since his grand outing in the Sultan of Johor Cup in 2017 where the India Colts won the Bronze Medal, Dilpreet's career has soared to new heights. He was called-up for the Senior Camp and soon became part of the team in almost every major tournament since 2018 including the Commonwealth Games, Asian Games as well as the World Cup in Bhubaneswar, Odisha.

Now, having been part of India's historic feat at the Tokyo Olympic Games where they won the coveted Bronze Medal, a feat India has been waiting for 41 years, Dilpreet feels fortunate to be part of this team. He said, "We all worked so hard to achieve this feat. We never let any difficulties during the pandemic affect our morale. The Seniors played a big part in encouraging us constantly and making us feel like we can do this. I feel so fortunate to be part of this incredible group and yes, I do believe I have been lucky to have had such a great start to my international career," stated the young forward from Punjab.