S Sushil Kumar: A journey from an Olympian to a murder accused. 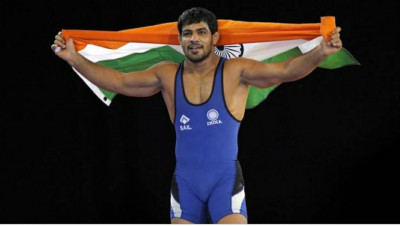 Sushil Kumar was born in Baprola village, near Najafgarh in South West Delhi. His father, Diwan Singh was a driver in MTNL Delhi while his mother Kamla Devi is a housewife. He was inspired to become a wrestler by his father who himself was a wrestler & his cousin Sandeep. Sandeep later gave up his wrestling career as the family could only support one wrestler. Sushil Kumar trained himself to become a wrestler at the wrestling school of in the Chhatrasal Stadium from an early age of 14. Despite the poor financial condition along with the lack of proper training facilities even for the 2008 Olympics wrestling team his family made sure he got all the necessary facilities ranging from the training equipment to his own diet. He is a strict vegetarian proving that one does not need to consume non-veg food for a protein rich diet. He has completed his graduation as well as post-graduation from the Noida College of Physical Education, Dadri. He is currently employed as an assistant commercial manager with the Indian Railways. Odisha Police arrested Sushil Kumar in connection with the murder of former junior national wrestling champion Sagar Dhankhar during a brawl in the Chhatrasal Stadium on 4 May 2021.
He won the bronze medal at the 2008 Olympics in the 66Kg category followed by a gold medal at the World Wrestling Championships & finally a silver medal at the 2012 London Olympics in the 66Kg category. He also won the Arjuna Award in 2005, Rajiv Gandhi Khel Ratna award which is India’s highest sporting honor & also the Padma Shri in 2011.