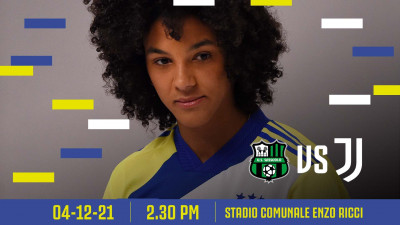 OVERALL RECORD Juventus have won seven of their eight games against Sassuolo in Serie A (1L) and have kept a clean sheet in five matches against the Neroverde, including the most recent two.

UNBEATEN STREAK Juventus is the team with the longest-running unbeaten streak of matches in Serie A (49 - 47W, 2D). The last defeat in the top-flight came against Sassuolo back in March 2019. Tomaselli's goal in the final minutes was decisive after those of McSorley and Girelli.

SCORING AGAINST SASSUOLO Only Cristiana Girelli (five) has scored more goals than Valentina Cernoia against Sassuolo for Juventus in Serie A (four, which includes her last brace in the top-flight, last April at the Neroverde’s home).

GREAT GOALKEEPING Roberta Aprile (100%) and Pauline Peyraud-Magnin (91%) are the two goalkeepers with the best percentage of saved shots in this league.

FAMILIAR FACE Martina Lenzini knows Sassuolo well having featured in 53 appearances for the Neroverde side. The Juventus player is the central defender who has the highest number of successful passes in the opposition’s half of this league season