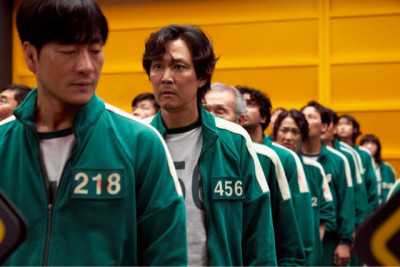 Most upsetting property was that giant doll with darting eyes. And those rapid shots eliminate contestants in no time. They had least clues about the dystopian, violent world waited out there when voluntarily returned to play.

Netflix’s new sensation ‘Squid Games’ was a hooked, horrified show to watch. If you are a game series fan you would probably watch nine episodes of this Korean series at a shot. I had to take short intervals and restore myself due to the brutal rule of the game - when one wins, the other dies.

That smiling, disarmed man waits at the metro station with two red and blue ddakji envelopes can change your life forever. Everybody has a sad debt story in turn which leads to the game and hugely tempting prize money. Games between haves and have-nots ever end?

I loved that paired connect between the opening shot portrays the backstory of a simple, yet thrilling squid game and the last shot of the game, the defeated recollects how they would run to moms for food after a tiresome play. Squid Game tries to retain this childhood camaraderie in all games happen at a facility in a far-off island. But it’s not a chid game anymore. All lives are at stake here.

Stick with team is always a winning formula. Seong Gi-hun (Lee Jung-jae), the 456th contestant and protagonist of this series, his childhood opponent Cho Sang-Woo (Park Hae-Soo), the gentle old man (Oh Yeong-su) with tumour, and helpless immigrant Ali (Anupam Tripathi) form a team and lead the show alongside other contestants.

It’s a discreet script and brilliant direction by Hwang Dong-hyuk. Ensemble cast connected with subtle emotions. Music never slips into high dramatic tones. Even the shades and properties used at the facility were thoughtful.

First part of Squid Game ends at the ninth episode with dramatic twists and an obvious lead to the second series. The wait is on..