South Africa has entered a new phase of the COVID pandemic: what that means 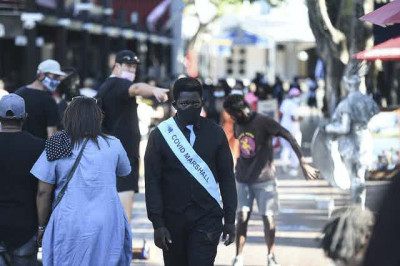 Confirmed cases of SARS-CoV-2 have been increasing in South Africa in recent weeks. This has been largely driven by two offspring – known as the BA.4 and BA.5 sub-lineages – of the Omicron variant first identified in South Africa late last year.

What’s notable about the most recent spike is that there are a number of differences between what the country is currently experiencing and the first four waves of COVID-19 in South Africa.

Firstly, nearly all South Africans now have some form of immunity. This is due to either having been exposed to the virus, or being vaccinated, or a combination of both .

Secondly, the current resurgence has only seen a small increase in hospitalisations. And, so far, a very minor increase in excess mortality.

Thirdly, the current resurgence is the result of a sub-lineages of the variant (Omicron) that caused the fourth wave. The shift to resurgences driven by sub-lineages rather than new variants potentially heralds a change in the evolutionary pattern of the virus and a move to it becoming endemic.

Lastly, the country currently has the lowest level of restrictions in place compared to any period since the start of the pandemic.

These differences matter because they have important implications for interpretation of COVID-19 trends and the associated response. They show that South Africa appears to have entered a new phase of the epidemic.

In this new phase, the high population-level immunity in South Africa likely means that in the absence of a new, more severe variant, future spikes in infections are unlikely to result in large increases in hospitalisations and deaths.

This makes it increasingly difficult to use the same definitions and interpret the data in the same way as during the past two years. And it means that the country needs new ways to monitor risk which, in turn, will inform potential policies to protect the health system as well as individual risk mitigation.