Sonnets are one of the most structured forms in poetry. 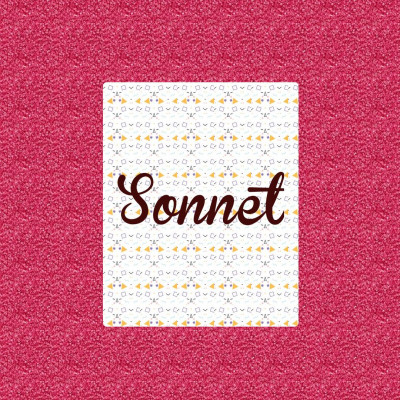 A sonnet is a poem structured in the form of 14 lines, usually iambic pentameter, that expresses a thought or idea and employs an established rhyme scheme.

The sonnet was developed by an early thirteenth-century Italian poet, Giacomo da Lentini. However, it was the Renaissance Italian poet Petrarch who refined and made this poetic literary device famous.

Sonnets were adapted by Elizabethan English poets and William Shakespeare in particular.

Sonnets have wide-ranging themes. Some of these themes pertained to love such as in the sonnets of Shakespeare. Some are related to beauty whether it is of nature or women such as in Wordsworth or Milton and some are related to death such as in Milton’s sonnets. Some sonnets express human emotions such as those of the classical age.

Here is Sonnet 116 of Shakespeare

Let me not to the marriage of true minds

Admit impediments. Love is not love

Which alters when its alteration finds,

Or bends with the remover to remove.

O no! it is an ever-fixed mark

That looks on tempests and is never shaken;

It is the star to every wand'ring bark,

Whose worth's unknown, although his height be taken.

Love's not Time's fool, though rosy lips and cheeks

Within his bending sickle's compass come;

Love alters not with his brief hours and weeks,

But bears it out even to the edge of doom.

If this be error and upon me prov'd,

I never writ, nor no man ever lov'd.