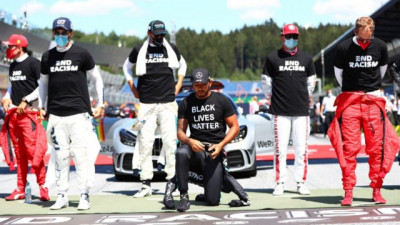 Meanwhile Bottas’ wheel nut is still stuck to his car

He never had it easy

He’s the best there is live with it guys

I see a lot of envy the way people try to put him down. Plus the old mindset about the inferiority or superiority of races

He has always been a sore loser. His fame has gone to his head

All teams do it. They have to look after their interest. They will always give preference to the better driver who gets them more podiums. They are not doing anything wrong.

Mercedes, like any other team is not a stranger to Team orders. There have been many instances where Bottas has overtaken Hamilton only to immediately be told over the radio to give back the position to Lewis.
That’s where the meme ‘Valterri, it’s James’ came from.

Check out this YouTube video which further proves the point: https://youtu.be/358KZP3-mNM

I beg to disagree as Hamilton puts himself on the podium due to the sheer dint of his hard work and hugely superior driving skills. No one does it for him. And Bottas is no where in that league so obviously Mercedes will back it’s star performer.

Also his go to response for any hate that he recieves is, 'they don't want to see a black man on the podium', this might have been true a few years ago but definately isn't anymore. It's just people don't like how Mercedes is head over heels for him while kind of ignoring Bottas' existence. I totally agree with you that he is a cry baby.

Yeah, man. It was so annoying watching him moan throughout the race yesterday. Even the commentators said ‘it looks like he’s lost interest in the race entirely’ despite coming in Seventh!!

Lewis Hamilton has won the World Drivers Championship seven times now. This feat is incredibly impressive and is testament to the fact that he is one of the greatest drivers to have raced on a grid.

With every race win, we hear the same words from Hamilton over the radio. “I would like to thank the team. I have the best fans in the world. This one’s for you guys.” Quite often he also likes to add some corny message which is supposed to go out to all of his fans. Something along the lines of ‘you can do anything! Don’t let anybody tell you you can’t do what you want!’

He is repetitive victory messages almost acting like a self parody now. But there is another side to him which is quite apparent to F1 fans all over the world. One which we got to witness yesterday as well at one of the less fortunate races for Mercedes AMG F1 in the form of the Monaco Grand Prix.

The messages of hope, perseverance and hard work all go down the drain the day the race does not go in favour of Hamilton. His first instinct is always to blame the team and pretend like he was not outclassed on the track by another driver. It’s either his own team‘s fault or that of another driver which cost him his race. Very rarely do we see Hamilton owning up to a mistake.

Last year, Alex Albon of Redbull Racing had called Hamilton a sore loser after Hamilton crashed into him in race during an overtake and refused to admit his mistake. Even yesterday, Hamilton continued blaming the team and car for his lacklustre performance despite the fact that his teammate Valtteri Bottas was outperforming him. Bottas was on the road for pole position which meant that he would start the race at the front of the grid. Hamilton however could not come even close to the speed of his teammate.

He’s got the right words to say whenever he’s on top. It’s time he learnt how to deal with the bad days too.