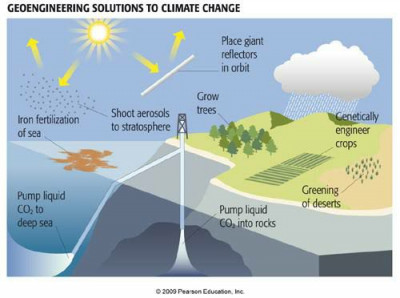 The agreement has a goal of stabilising global warming between 1.5-2 Deg C by the end of the century. But the earth has already warmed by nearly 1.1 Deg C and we see the adverse impacts already felt around the world.

The voluntary commitments made in the Nationally Determined Contributions (NDC) by all the countries to the United Nations (UN) before the Paris Agreement, if implemented may still lead to a warming in the range of 2.7-3 Deg.

This level of warming could lead to more unprecedented extreme climatic events threatening humanity and nature.

In such a scenario, the leaders and countries may want an urgent solution, to reduce warming and the related adverse impacts. Some scientists believe “geoengineering” is the solution to such an emergency.

Geoengineering is the deliberate large-scale alteration of the earth’s environment to mitigate climate change. It is one of the quickest ways to reduce the warming of a region or globally.

One of the most important geoengineering options is Solar Radiation Management (SRM).

SRM aims at reflecting inbound sunlight into space, reducing the amount of heat absorbed by the earth and lowering global temperatures. Its techniques involve:


>Stratospheric (20 to 50 km) aerosols injection — the spraying of small, reflective particles into the upper atmosphere to reflect some sunlight before it reaches the earth.

>Albedo enhancement aimed at increasing the reflectiveness of clouds or the land surface so that more of the sun’s heat is reflected ba space.

>Space mirrors blocking a small proportion of sunlight before it reaches the earth.

A real-life example is the Mount Pinatubo volcano in the Philippines that erupted in 1991. An estimated 20 million tonnes of sulfur dioxide and ash particles were released into the stratosphere. Such volcanic eruptions can impact global climate, reducing the amount of solar radiation reaching the earth's surface, lowering temperatures for many years.


Note : Solar geoengineering can cool the planet rapidly within 1-2 years and is estimated to cost much less than the conventional climate mitigation techniques through renewable energy, energy efficiency, etc.