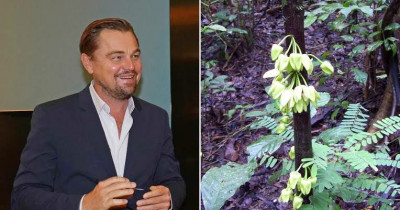 A newly discovered tree has been named after the Hollywood megastar Leornado DiCaprio.

Scientists at the Royal Botanic Gardens, Kew, say they wanted to honour the star for his help in saving a rainforest.

The tree, which has been given the official name, Uvariopsis dicaprio, grows only in the Cameroon forest known for its incredible biodiversity.

One of the largest relatively untouched rainforests in Central Africa, it is home to the Banen people and an array of unique flora and fauna, including threatened gorillas, chimps and forest elephants.

International experts wrote a letter to the government documenting the precious animal and plant species at risk of extinction. The issue was picked up by DiCaprio, whose social media posts to his millions of followers added momentum to the campaign.

The government later revoked plans to allow logging, although the forest has yet to be officially designated a national park.

The small tropical evergreen tree has glossy yellow flowers that grow from its trunk. A member of the ylang ylang family, it has been found only in a small area of the forest and is critically endangered.