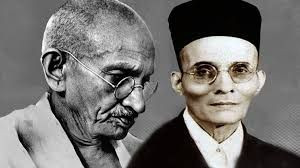 Historical records seem to suggest otherwise. Gandhi returned to India from South Africa only in 1915. By this time Savarkar, who had been serving sentence in the Cellular jail in the Andamans, had already written two clemency letters to the British - in 1911 and 1913. With contact with the outside world being strictly prohibited for the prisoners of the jail - called the Kala Paani - it does sound incredulous that Savarkar wrote those letters on the Mahatma's advice.

Before Gandhi's return to India, he had had only one interaction with Savarkar: At an India House function in the UK in 1909. Savarkar was arrested and extradited to India only in 1910. So, Gandhi could hardly have offered advance advice in the matter to Savarkar!

In a letter to his brother Narain Rao on 28 October 1916, Savarkar had even demanded that the Congress must pass a resolution seeking release of Indian prisoners. Four years later, Gandhi had pleaded the case for the release of Savarkar and other prisoners after the British government issued a proclamation that political prisoners would be freed. This was seen in the context of the Mahatma's desire to mainstream all manner of political prisoners in the freedom struggle. Writing in the  "Young India" in May 27, 1920, Gandhi wrote: "While several political prisoners have been released, Savarkar and hundreds of other Indians continue to be in jail. If the government has no evidence against him, the Viceroy has no option but to release Savarkar". However, the article provides no hint that Gandhi had advised Savarkar to apologise to the British rulers.