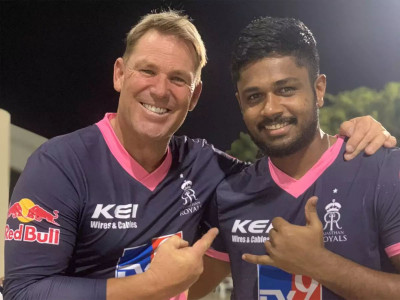 Under Sanju Samson's captaincy, Rajasthan Royals have reached the final of the Indian Premier League (IPL) 2022. Last time when they reached the finals was way back in 2008 under the leadership of Shane Warne

The 27-year-old Samson has led from the front with his smart strokeplay and matured decision-making as the Royals booked only their second IPL final since making it there in the debut season (2008), which they also went on to win.

It is fascinating that Sanju, one of the best wicketkeeper batsmen in Indian cricket, was virtually an unknown commodity when the Royals last reached the IPL final, 14 years ago.

He was an under 16 player when Warne lifted the cup.. " I remember playing an under-16 game somewhere in Kerala and I remember watching the last game with my friends and remember that last run where Shane Warne and Sohail Tanvir hit the run and they were running, it was a very vague", Samson told Harsha Bhogle last night.

The 2008 final was held at the DY Patil Stadium in Mumbai. Batting first, Suresh Raina's 30-ball 43 along with captain MS Dhoni's 17-ball unbeaten 29 helped Chennai Super Kings finish with 163 for five in 20 overs. Yus
uf Pathan was the pick of the bowlers for Rajasthan with his 3 for 22 and he also played a key role in the chase with his 39-ball 56 laced with three boundaries and four maximums. However, a couple of quick dismissals in the fag end of the innings left RR eight to score of the last six balls with Warne and Tanvir on strike. But the pair held their nerves in the crunch moment to complete the chase in the final ball as Rajasthan Royals, a team that was written off at the very start of the season, managed to stun all and win their maiden IPL title.