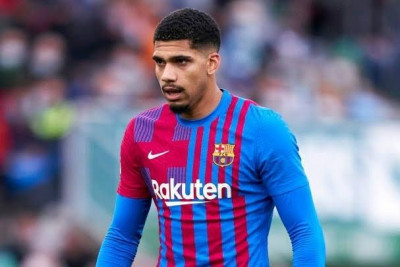 Barcelona defender Ronald Araujo is likely to sign a new long-term contract with the club 'in the
coming days,' according to reports.

Araujo's current contract at Camp Nou expires in 2023, and he has been heavily connected with
a transfer away this summer when it appeared that a deal would not be reached - Manchester
United, Chelsea, and Liverpool have all been mentioned.

Fabrizio Romano, on the other hand, has stated that the Uruguayan centre-back would sign a
new four-year contract until 2026. That will safeguard his future until he turns 27, with a €1
billion buyout clause - the same number included in Ansu Fati and Pedri's contracts.

After becoming one of the finest performers under Xavi's leadership, Barcelona has been in
talks with Araujo for quite some time about a new deal. Araujo, on the other hand, has always
stated that he wants to stay at Barcelona as long as he gets a reasonable raise, which the club
has agreed to match.

The Catalan giants are also said to be in talks with 17-year-old midfielder Gavi, who is expected
to be the next player to sign a new contract at Camp Nou. The teen sensation, who has been
linked with Liverpool, is said to have turned down three offers from Barcelona, and the club is
still in talks with his entourage about a possible deal. The Blaugrana are said to have already prepared a new improved contract offer for the Spaniard and are hoping to reach an agreement
to keep the youngster in Catalonia.

Xavi had this to say about Araujo and Gavi: “They are very important. The club cannot allow
either of them to leave.

“They are transcendent footballers. I think their renewals are a matter of time. I want to think
that the two of them will stay and reach an agreement with the club. I'm optimistic.”

Both players are under contract until 2023, so there is still time to sign them to long-term deals.