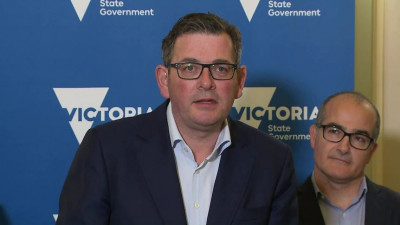 The shock announcement that four Victorian senior ministers will resign at the next state election has resulted in a significant shake-up of the government's front bench and shed light on the future of Victorian Labor — including who will succeed Premier Daniel Andrews.

Mr Andrews has put forward Transport Infrastructure Minister Jacinta Allan as his pick to replace Mr Merlino as his deputy.

Her appointment will not be confirmed until after the Labor Caucus meets at 10am today, but she has the surprise support of heavyweights from the opposing faction and is seen as the natural candidate for the job.

Paul Strangio, professor of politics at Monash University, said the deputy role would place Ms Allan as the successor to Mr Andrews when he eventually gives up the top job.

"Effectively what he's done today is announce her as the heir apparent — he's announced a succession plan," he said.

Meanwhile, Mr Andrews also announced on Friday that Mary-Anne Thomas, Lily D'Ambrosio, Danny Pearson, Ben Carroll and Natalie Hutchins would be made coordinating ministers of various departments. These positions are determined by the Premier.

Labor party tradition is that the deputy premier hails from a different faction to the premier.

Ms Allan is from the socialist left — the same faction as Mr Andrews.

Despite this, Treasurer Tim Pallas — a member of the right faction — said he backed Ms Allan's appointment.

"I'll certainly be recommending to the right caucuses that they should be supporting Jacinta for the role," he said.

Outgoing minister Lisa Neville, who belongs to Labor's right, told ABC Radio Melbourne that it would not be the first time the deputy and the premier came from the same faction.

"It's not abnormal at all to have that situation," she said on Friday.

She said she was sure there would be "factional dealings" happening before the caucus meeting, but put her support behind Ms Allan.

"I think Jacinta is absolutely deserving of that job, will be fantastic in that role," she said.